The Massacre of Kondomari  refers to the execution of male civilians from the village of Kondomari in Crete by an ad hoc firing squad consisting of German paratroopers on 2 June 1941 during World War II.The shooting was the first of a series of reprisals in Crete. It was orchestrated by Generaloberst Kurt Student, in retaliation for the participation of Cretans in the Battle of Crete which had ended with the surrender of the island two days earlier. 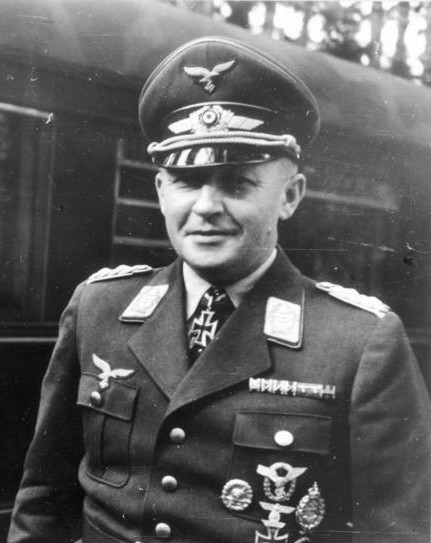 The massacre was photographed by a German army war propaganda correspondent whose negatives were discovered 39 years later in the federal German archives by a Greek journalist.

The civilian population of Crete had joined in the defence of their island alongside Greek and British armed forces. There are many accounts of them killing parachutists, some as they were still hanging in their parachutes as they landed. Some might regard this as a matter of self defence but the Germans interpreted it as “partisan” activity because they were not wearing uniform, and in their eyes outside the rules of warfare. There were also rumours that bodies had been mutilated or that even some parachutists had been tortured – although a much more likely explanation that bodies – necessarily left on the landing grounds – very rapidly decomposed in the heat.

Following Student’s order, the occupants of Kondomari were blamed for the death of a few German soldiers whose bodies had been found near the village. On 2 June 1941, four lorries full of German paratroopers from the III Battalion of Luftlande-Sturm-Regiment 1 under the command of Oberleutnant Horst Trebes surrounded Kondomari. Trebes, a former member of the Hitler Youth, was the highest-ranking officer of the Battalion to have survived the Battle unwounded.

Men, women and children were forced to gather in the village square. Then, a number of hostages was selected among the men while women and children were released. The hostages were led to the surrounding olive groves and later fired upon. The exact number of the victims is unclear. According to German records, a total of 23 men were killed but other sources raise the toll to about 60. The whole operation was captured on film by Franz-Peter Weixler, then serving as a war propaganda correspondent (kriegsberichter) for the Wehrmacht.

Franz Peter Weixler, Wehrmacht kriegsberichter (Army war correspondent) photographed and preserved his negatives of the massacre. Weixler was later charged with treason and held by the Gestapo. Here is an English translation his original statement for the trial of Hermann Goering.

“The punitive expedition consisted of Trebes, another lieutenant, an interpreter, two sergeants and about twenty five parachutists of the Second Battalion. As a photographer assigned to my division I was permitted to accompany this commando. Near the village of Malemes, we stopped and Trebes showed us the corpses of several soldiers, obviously in the process of decay. He incited the men against the civilian population. We continued our drive to the village of Kondomari.

The men got off, and ran into the few houses of the little community. They got all men, women, and children onto the little square.

A German soldier brought out the coat of a parachutist which he had picked up in one of the houses. and which had a bullet hole in the back. Trebes had the house burned down immediately. 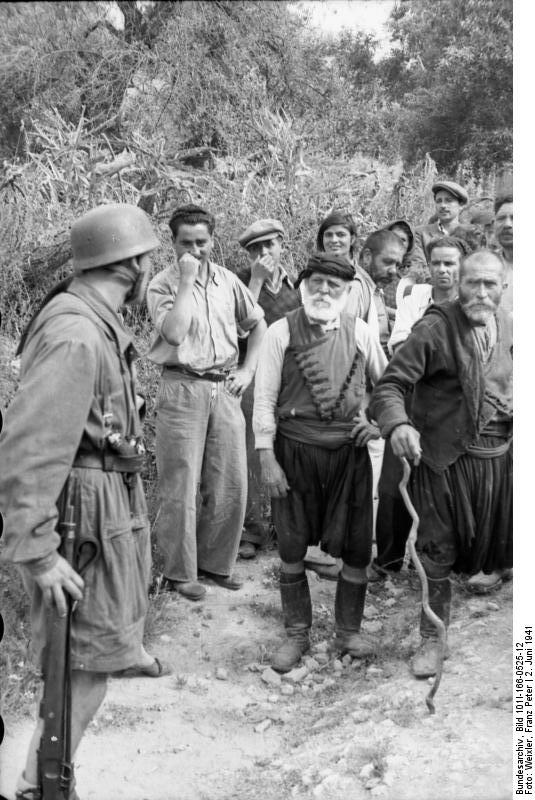 One man admitted having killed a German soldier, but it was not possible to convict any of the others of any crimes or plundering, and I therefore asked Trebes to stop the contemplated action and give us orders to return, taking with us only the one man. Trebes however gave orders to separate the men from the women and children; then he had the interpreter tell the women that all of the men would be shot because of having murdered German soldiers, and that the corpses would have to be interred within two hours.

When Trebes turned his back for a few moments, I made it possible for nine men to get away. Trebes had the men form a half circle, gave the order to fire, and after about fifteen seconds, everything was over.

I asked Trebes, who was quite pale, whether he realized what he had done, and he replied that he had only executed the order of Hermann Goering, and avenged his dead comrades. A few days later he received the Knights Cross from Goering for his “braveness” in Crete.” 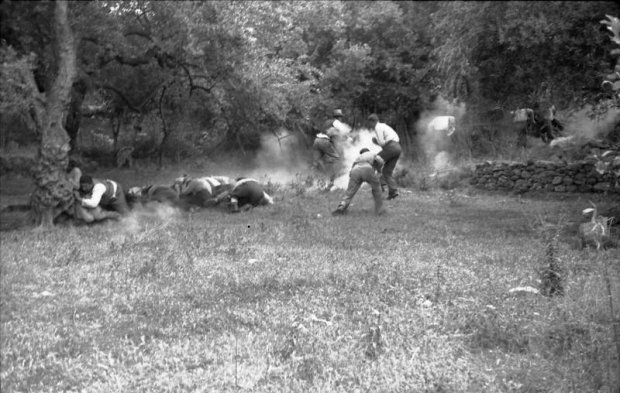 The following day an even worse massacre was conducted in the village of Kandanos, where 180 civilians were killed, possibly by a squad also led by Horst Trebes. The village was razed to the ground.