It is no surprise that the Oxford English Dictionary is the leading dictionary when it comes to the English language.As a historical dictionary, the Oxford English Dictionary explains words by showing their development rather than merely their present-day usages. Therefore, it shows definitions in the order that the sense of the word began being used, including word meanings which are no longer used.

It is also no surprise that it originates from Oxford, hence the name. What will be a surprise though is that one of the main contributors was an American, and an even bigger surprise an American murderer.

William Chester Minor, also known as W. C. Minor (June 1834 – March 26, 1920) was an American army surgeon and one of the largest contributors of quotations to the Oxford English Dictionary.

William Chester Minor, M.D., graduated from Yale University in 1863. After a short research stint, he joined the Union Army to perform battlefield medicine for wounded soldiers. His academic work laid the foundation for his field medicine and then his research for the OED.

After witnessing the horrors and atrocities of the war, Minor developed paranoid schizophrenia. Not only did the doctor see wanton death at the Battle of the Wilderness in May 1864, but his commanding officer ordered him to brand a letter “D” on the cheek of an Irish deserter.

The mark scarred the patient’s body, but it also warped Minor’s mind because he started to have paranoid delusions about the Irish following the incident.

His military superiors believed Minor was incapacitated and could no longer perform his basic duties following schizophrenic episodes. So, Minor took his military pension and some of his family’s wealth to move to Lambeth, England, in 1871.

Haunted by his paranoia, he fatally shot a man named George Merrett, who Minor believed had broken into his room, on February 17, 1872. Merrett had been on his way to work to support his family of six children, himself, and his pregnant wife, Eliza. After a pre-trial period spent in London’s Horsemonger Lane Gaol, Minor was found not guilty by reason of insanity and incarcerated in the asylum at Broadmoor in the village of Crowthorne, Berkshire.

As he had his army pension and was not judged dangerous, he was given rather comfortable quarters and was able to buy and read books. 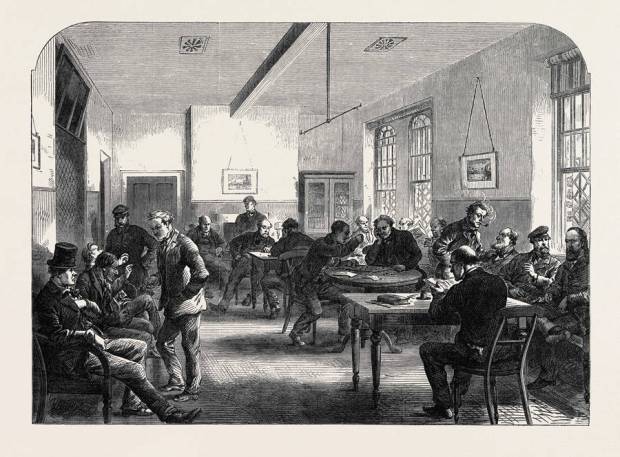 It was probably through his correspondence with the London booksellers that he heard the call for volunteers from what was to become the Oxford English Dictionary (OED). He devoted most of the remainder of his life to that work. He became one of the project’s most effective volunteers, reading through his large personal library of antiquarian books and compiling quotations that illustrated the way particular words were used. He was often visited by the widow of the man he had killed, and she provided him with further books.

The compilers of the dictionary published lists of words for which they wanted examples of usage. Minor provided these, with increasing ease as the lists grew. It was many years before the OED‘s editor, Dr. James Murray, learned Minor’s background history, and visited him in January 1891. In 1899 Murray paid compliment to Minor’s enormous contributions to the dictionary, stating, “we could easily illustrate the last four centuries from his quotations alone.”

Minor’s condition deteriorated and in 1902, due to delusions that he was being abducted nightly from his rooms and taken to places as far away as Istanbul and forced to commit sexual assaults on children, he cut off his own penis (autopeotomy) using a knife he had employed in his work on the dictionary.

His health continued to worsen, and after Murray campaigned on his behalf, Minor was released in 1910 on the orders of Home Secretary Winston Churchill.

He was deported back to the United States and resided at St. Elizabeths Hospital where he was diagnosed with dementia praecox. He died in 1920 in Hartford, Connecticut after being moved in 1919 to the Retreat for the Elderly Insane there.