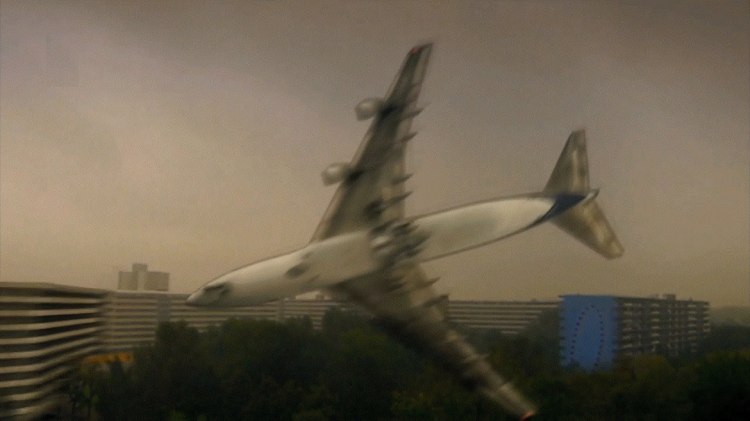 It is strange how something can be forgotten and yet be vividly remembered. This disaster had slipped my mind but yet when I was reminded of it the images became very clear again.

Today marks the 25th anniversary of the Bijlmer disaster in Amsterdam.

At Sunday evening October 4, 1992, a Boeing 747 freight carrier of El Al, crashed on the flats Groeneveen en Klein Kruitberg in the Bijlmermeer, a district in the south east of Amsterdam with the official name of Amsterdam Zuidoost.

El Al flight 1862 caused the dead of 43 people. The three crew of the airplane also died as well as a passenger, which was a local El Al employee on het way to her marriage in Tel Aviv. Since there were most probably also illegal people occupying the apartments in the flats the exact number of deaths is never exactly known.

The plane came from New York and was on the way to Tel Aviv via Schiphol. Upon arrival of the plane the ‘spotters’ noticed that one of the engines was not hanging properly on the plane. During the flight three major failures were noticed by the crew.

However, makeshift repairs were done while tanking the plane. Also there was an unkown cargo loaded on the plane which was approved by the customs, but what was later discovered  not physically checked.

Flight 1862 got airborne at 6.22 pm. Almost immediately the plane was in trouble and a couple of minutes later lost two engines on one side. At 6.35 pm the plane finally crashed into the two flats.

At 6:35:42 pm local time, the aircraft nose-dived from the sky and slammed into two high-rise apartment complexes in the Bijlmermeer neighbourhood, at the corner of a building where the Groeneveen complex met the Klein-Kruitberg complex. It exploded in a fireball, which caused the building to partially collapse inward, destroying dozens of apartments. The cockpit came to rest east of the flats, between the building and the viaduct of Amsterdam Metro Line 53; the tail broke off and was blown back by the force of the explosion.

At the time of the crash, two police officers were in Bijlmermeer checking on a burglary report. They saw the aircraft plummet and immediately sounded an alarm. The first fire trucks and rescue services arrived within a few minutes of the crash. Nearby hospitals were advised to prepare for hundreds of casualties. The flats were partly inhabited by illegal immigrants, and the death toll would be difficult to estimate in the hours after the crash. 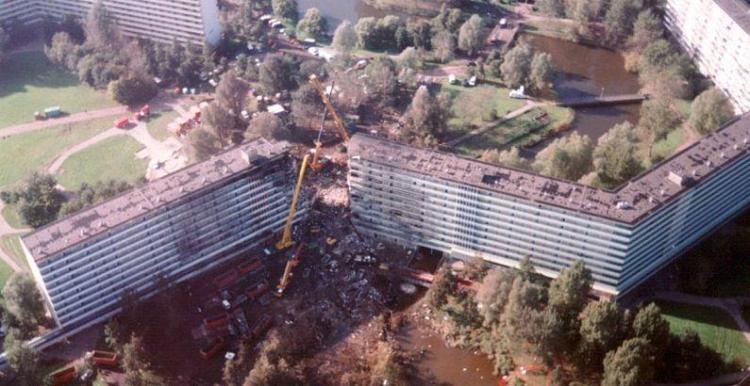 The crash was also witnessed by a nearby fire station on Flierbosdreef street. First responders came upon a rapidly spreading fire of “gigantic proportions” that consumed all 10 floors of the buildings and was 120 meters wide, the length of a football field. There were no survivors from the crash point; only those who managed to escape from the remainder of the building.Witnesses reported seeing people jumping out of the building to escape the fire.

Hundreds of people were left homeless by the crash; the city’s municipal buses were used to transport survivors to emergency shelters. Firefighters and police also were forced to deal with reports of looting in the area.

Prime Minister Ruud Lubbers and Queen Beatrix visited the scene of the disaster the following afternoon. The prime minister said, “This is a disaster that has shaken the whole country.” 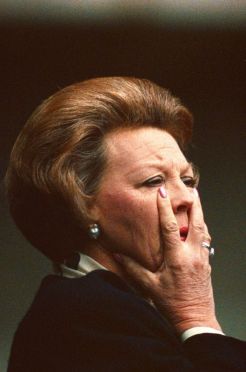 The aircraft’s flight data recorder was recovered from the crash site and was heavily damaged, with the tape broken in four places. The section containing the data from last two and a half minutes of the flight was particularly damaged. The recorder was sent to the United States for recovery and the data was successfully extracted.Despite intensive search activities to recover the cockpit voice recorder from the wreckage area, it was never found, although El Al employees stated that it had been installed in the aircraft.

43 people died in the accident: the four occupants of the aircraft (three crew and one non-revenue passenger) and 39 people on the ground. This was considerably lower than expected: the police had originally estimated a death toll of over 200,and Amsterdam Mayor Ed van Thijn had said that 240 people were missing.At the time of the crash many potential victims were not at home, possibly because of the pleasant weather on the evening of the crash.Twenty-six people sustained non-fatal injuries; 11 of these were injured seriously enough to require hospital treatment.

Soon after the disaster it was announced that the El Al Boeing 747 had contained fruit, perfumes, and computer components. Dutch Minister Hanja Maij-Weggen asserted that she was certain that it contained no military cargo. 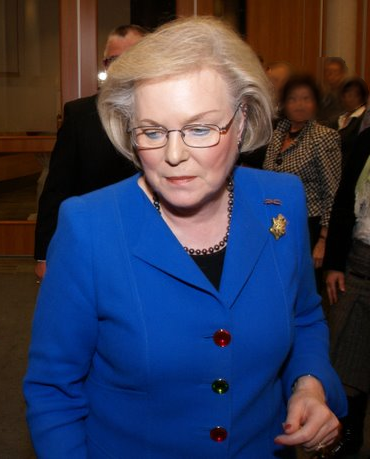 The survivors’ health complaints following the crash increased the number of questions about the cargo. In 1998 it was publicly revealed by El-Al spokesman Nachman Klieman that 190 litres of dimethyl methylphosphonate, a CWC schedule 2 chemical which, among many other uses, can be used for the synthesis of Sarin nerve gas, had been included in the cargo. Israel stated that the material was non-toxic, was to have been used to test filters that protect against chemical weapons, and that it had been clearly listed on the cargo manifest in accordance with international regulations. The Dutch foreign ministry confirmed that it had already known about the presence of chemicals on the aircraft. The shipment was from a US chemical plant to the Israel Institute for Biological Research under a US Department of Commerce license. According to the Chemical weapons site CW Info the quantity involved was “too small for the preparation of a militarily useful quantity of Sarin, but would be consistent with making small quantities for testing detection methods and protective clothing. 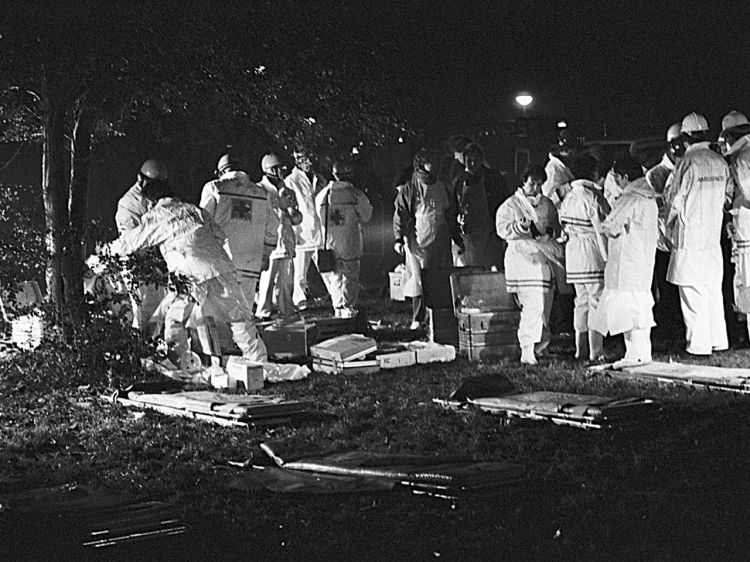