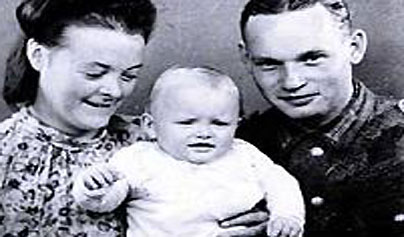 The baby in this picture is no other than Anni-Frid Synni Lyngstad, from ABBA.She was one of the approximately 12,000 known as the Tyskerbarnas or German children.

Anni-Frid Lyngstad’s story is typical of the suffering of thousands. After her birth in November 1945 – the result of a liaison between her mother, Synni, and a German sergeant, Alfred Haase – her mother and grandmother were branded as traitors and ostracized in their village in northern Norway. They were forced to emigrate to Sweden, where Anni-Frid’s mother died of kidney failure before her daughter was two.

She found her father by chance three decades later. They met for an emotional reunion in her Swedish villa, instigated by Benny Anderson, an Abba founder and Anni-Frid’s then husband.

It is alleged that some 0f these ‘Tyskerbarnas’ were even used as guinea pigs in drugs trials. These kids were part of a programme called Lebensborn e.V. (literally: “Fount of Life”) was an SS-initiated, state-supported, registered association in Nazi Germany with the goal of raising thebirth rate of “Aryan” children via extramarital relations of persons classified as “racially pure and healthy” based on Nazi racial hygiene and health ideology. Lebensborn encouraged anonymous births by unmarried women, and mediated adoption of these children by likewise “racially pure and healthy” parents, particularly SS members and their families.

Himmler regarded the Norwegians with their blue eyes and blond hair as especially Aryan and pure. 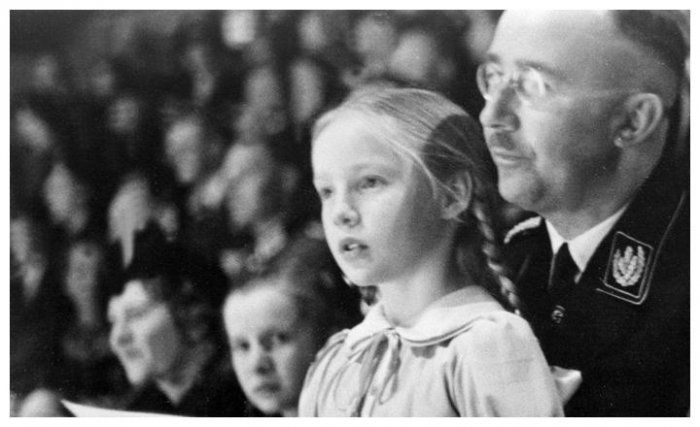 Initially set up in Germany in 1935, Lebensborn expanded into several occupied European countries with Germanic populations during the Second World War. It included the selection of “racially worthy” orphans for adoption and care for children born from Aryan women who had been in relationships with SS members. It originally excluded children born from unions between common soldiers and foreign women, because there was no proof of racial purity on both sides

These children (and also their mothers) were not treated very nicely by the post-war Norwegian authorities. When you were born in one of the “Lebensborn” homes, you could be institutionalized just because it was assumed that if your mother got involved with a German, she must have been mentally ill and you must have inherited her insanity or at least her debility. This would often result in forced adoptions and also sexual abuse.

Anni-frid Lyngstad was taken by her grandmother to Sweden, where they settled in the region of Härjedalen and her grandmother took any available job. Lyngstad’s mother, Synni, remained in Norway and worked for a period in the south of the country. Synni joined her mother and daughter in Sweden, and the three moved to Malmköping (72 km from Stockholm). Synni soon died of kidney failure, aged 21 leaving Lyngstad to be raised solely by her grandmother. In June 1949, they both relocated to Torshälla (just outside Eskilstuna), where Agny Lyngstad worked as a seamstress. Frida Lyngstad grew up in Torshälla and began attending school there in August 1952. Close contact with her family in Norway (notably her uncle and four aunts) continued, and Lyngstad recalls summer holidays spent with them at her birthplace. She was especially close to her Aunt Olive, who once stated that she saw how lonely and subdued Frida was and, as a result, always did her best to make her feel loved and welcomed during visits.

Her Father Alfred Haase died in 2009.