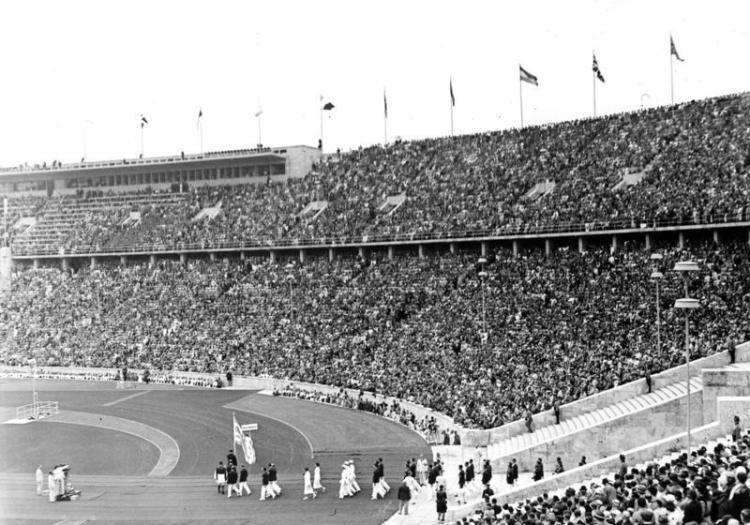 I am amazed that people are still surprised at the actions of the IOC, This year it was widely expected that Russia would be banned from the Rio Olympics due to doping scandal surrounding their athletes and the cover up of the Russian Olympic Committee.

The only thing the IOC is interested in is the IOC, this has been proven throughout history. Just think back to the 1972 Munich Olympic games where 11 Jewish athletes and officials were massacred. rather than stopping the games the IOC left it go on as if nothing happened.

It was clearest of all during the 1936 Olympic games that the IOC is nothing but a political entity. 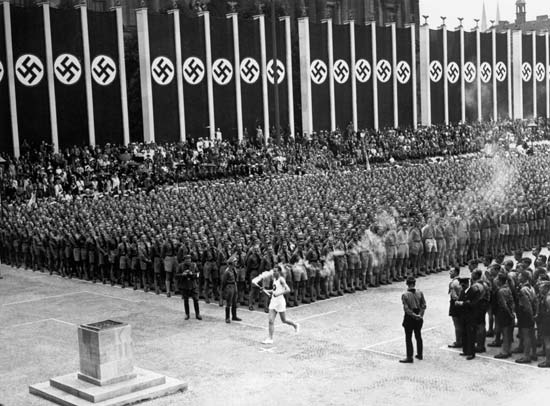 The 1936 Summer Olympic games in Berlin still serves as the template for the modern games.

The Summer Olympic Games serve as a grand podium for the belief that a nation’s best athletes can bolster its sense of pride and honor for another four years—setting the stage for real-world superheroes who defy the odds and challenge the capabilities of the human body. It’s a tradition the globe is unlikely to kick.

But 80 years ago, when the Summer Olympics opened on Aug. 1, 1936, in Berlin, that creed nearly crumbled. That year, it became increasingly clear that Germany only wanted to see its superheroes in one light: the stars of the Aryan race, superior for their genetic makeup rather than their athleticism. It provided Hitler with a showcase,It was a propaganda bonanza for him.

United States Olympic Committee president Avery Brundage became a main supporter of the Games being held in Germany, arguing that “politics has no place in sport”, despite having initial doubts. Later Brundage requested that a system be established to examine female athletes for what Time magazine called “sex ambiguities” after observing the performance of Czechoslovak runner and jumper Zdenka Koubkova and English shotputter and javelin thrower Mary Edith Louise Weston. (Both individuals later had sex change surgery and legally changed their names to Zdenek Koubek and Mark Weston.).

Despite not coming from a fascist country, French Olympians gave what appeared to be the Roman salute at the opening ceremony, although some have later claimed that they were just performing the Olympic salute, which was in fact a very similar action. 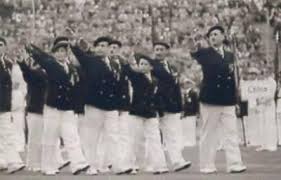 Although Haiti only attended the opening ceremony, an interesting vexillological fact was noticed: its flag and the flag of Liechtenstein were coincidentally identical, and this was not discovered until then. The following year, a crown was added to Liechtenstein’s to distinguish one flag from the other.

American sprinters Sam Stoller and Marty Glickman, the only two Jews on the U.S. Olympic team, were pulled from the 4 × 100 relay team on the day of the competition, leading to speculation that U.S. Olympic committee leader Brundage did not want to add to Hitler’s embarrassment by having two Jews win gold medals. 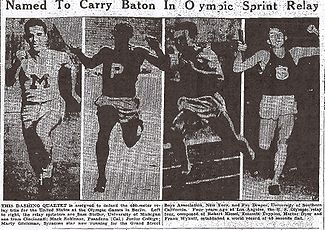 The German Olympic committee, in accordance with Nazi directives, virtually barred Germans who were Jewish or Roma or had such an ancestry from participating in the Games . This decision meant exclusion for many of the country’s top athletes such as shotputter and discus thrower Lilli Henoch, who was a four-time world record holder and 10-time German national champion,[and Gretel Bergmann who was suspended from the German team just days after she set a record of 1.60 meters in the high jump.The only Jewish athlete to compete for Germany was Helene Mayer , a member of the fencing team. She was a ‘token Jew’ to show the world that Germany was an ‘inclusive’ society. 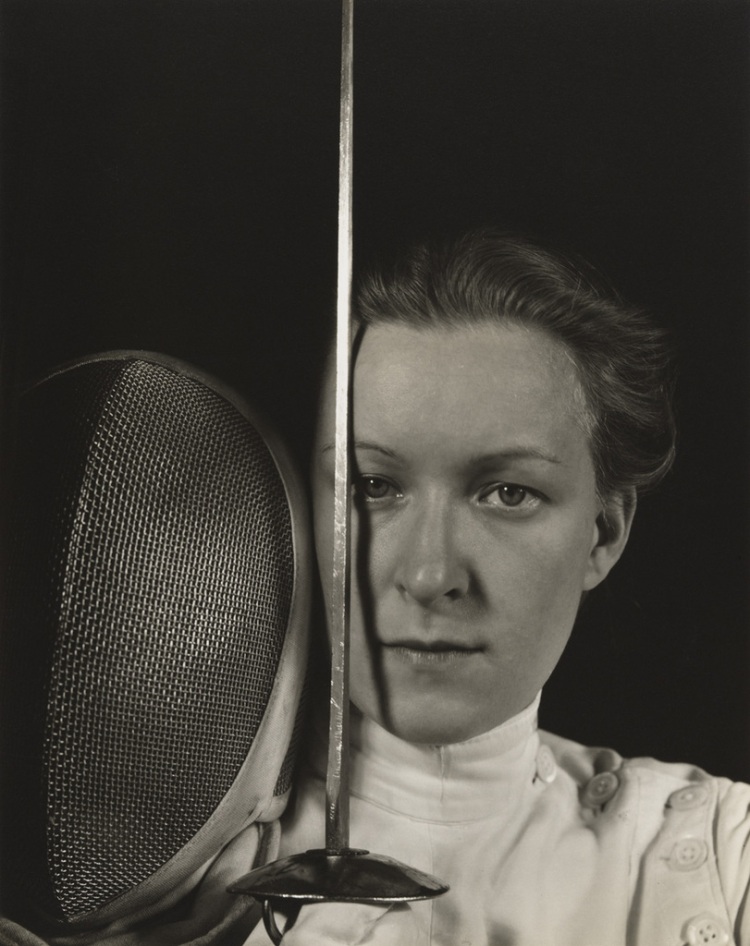 During the Games, Hauptmann Wolfgang Fürstner, the commandant of the Olympic Village in Wustermark, was abruptly replaced by Oberstleutnant Werner von Gilsa, commander of the Berlin Guard-Regiment. 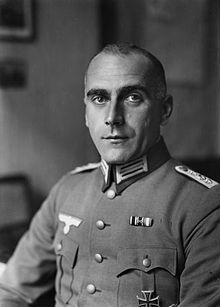 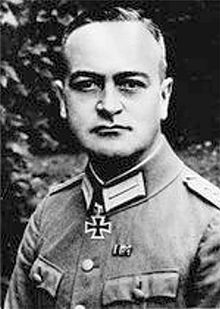 The official reason given by the Nazis was because Fürstner had not acted “with the necessary energy” after 370,000 visitors had passed through the village – between 1 May to 15 June – causing significant damage to the site. However this reason was just a pretext to disparaging the half-Jewish officer and expediting his removal Fürstner committed suicide shortly after the conclusion of the Berlin Olympics because he learned the Nuremberg Laws classified him as a Jew. As such, the career officer was to be expelled from the Wehrmacht.

Individual Jewish athletes from a number of countries chose to boycott the Berlin Olympics, including South African Sid Kiel, and Americans Milton Green and Norman Cahners. In the United States, the American Jewish Congress and the Jewish Labor Committee supported a boycott.

Some athletes and Olympics organizers in the United States and Europe considered pulling out of the Olympics altogether to compete elsewhere. The debate on whether to pull out on the American end was particularly heated, as the boycott began with the U.S. team. Avery Brundage, then the president of the American Olympic Committee, opposed a boycott, arguing that “the Olympic Games belong to the athletes and not to the politicians.

Some academics, including Burstin, now believe that Brundage was complicit in the Nazi’s anti-Semitism in the Olympics, and that he even attempted to paint American Jews as unpatriotic and misguided for supporting a boycott. Meanwhile, the Nazis, seeing the negative reaction to what was supposed to be a great moment for Germany, temporarily took down anti-Jewish propaganda and did what they could to clean up Germany’s image prior to the games. In the end, the U.S. would send several Jewish athletes to the games, and many journalists covered the games with a degree of positivity, with TIME reporting in 1936 that most newspapers focused on “the ceremonious procession” of the Olympics’ first modern Torch Relay rather than “other doings in Berlin.”

Though Hitler’s attempt to see Aryan athletes triumph was not a complete success—most famously due to the medal sweep brought by U.S. track star Jesse Owens. Jesse Owens won four gold medals in the sprint and long jump events. His German competitor Luz Long offered Owens advice after he almost failed to qualify in the long jump and was posthumously awarded the Pierre de Coubertin medal for sportsmanshipGerman athletes did walk away with the most Olympic medals. 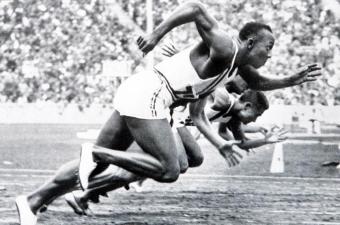 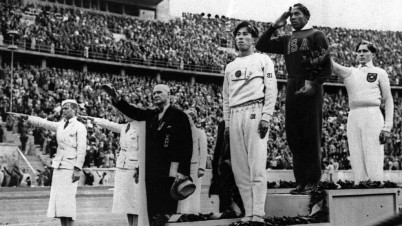 Germany had a prosperous year in the equestrian events, winning individual and team gold in all three disciplines, as well as individual silver in dressage. In the cycling match sprint finals, the German Toni Merkens fouled Arie van Vliet of the Netherlands. Instead of being disqualified, he was fined 100 marks and kept his gold. German gymnasts Konrad Frey and Alfred Schwarzmannboth won three gold medals.

Some thought the games showed Germany had successfully crawled out of the economic ditch it had fallen into post-WWI, and had ultimately acted as a great host.

Many Jewish athletes who either competed in the Olympics prior to 1936 or the 1936 Olympics itself would die in concentration camps during the Holocaust. Among them were Ilja Szraibman, a Polish swimmer and Roman Kantor, a Polish fencer, both of whom competed in 1936 and later died in Majdanek. 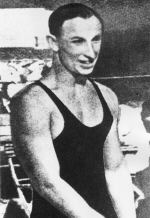 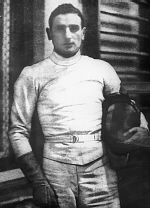 Notably, Alfred Nakache, a French swimmer who competed in the 1936 games, would also compete in the 1948 Olympic Games in London after surviving Auschwitz.

Even after Germany had annexed Austria and occupied Czechoslovakia, the IOC still scheduled the Winter Olympics to be held in Garmisch Partenkirchen in Bavaria.It was eventually held in St Moritz,Switzerland.

I have to be honest , I do enjoy the spectacle which is the Olympic Games. But I am under no illusion that it is politics with the veneer of sports.