I have seen so many gruesome images of the Holocaust, but for some reason, the pictures of these smiling and playing children touched me more than any other. I know none of them survived and the only crime they committed was being a child.

On the morning of 6 April 1944, members of the Lyon Gestapo who had been tipped off by an informant carried out a raid on the children’s home in Izieu and arrested everyone there. 44 children aged 4-17, and seven staff members who had been taking care of them, were incarcerated in the prison in Lyon and were deported to Drancy the following day. The deportation order was issued by Klaus Barbie, head of the Gestapo in Lyon. Barbie reported the arrest of the children and adults at the children’s home in a telegram that he sent to Paris. During the children’s detention in Lyon, the Germans discovered the whereabouts of some of their family members, who were also then taken to Drancy and later deported to their deaths in Auschwitz. 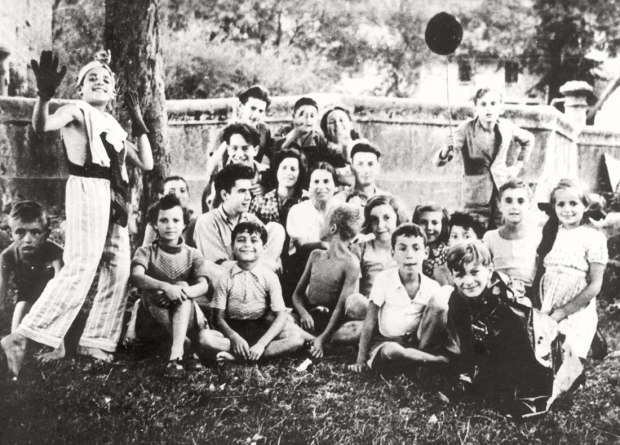 During the raid on Izieu, Leon Reifman, a medical student who took care of the sick children, managed to escape and hide on a nearby farm. His sister, Dr. Sarah Lavan-Reifman, who was the children’s home doctor, his parents, Eva and Moisz-Moshe, and his nephew, Claude Lavan-Reifman also lived in the home. They were all murdered at Auschwitz. Miron Zlatin, Sabine Zlatin’s husband who ran the children’s home with her, was deported on 15 May, together with two of the older boys from the children’s home, to Estonia, where they were all shot to death.

By the end of June 1944, all the children and adults caught in Izieu had been deported from Drancy. Most were sent to Auschwitz, including all the children and five of the adults, among them Sarah Lavan-Reifman, who refused to be parted from her son Claude and was sent together with him to the gas chambers.

Léa Feldblum, one of the caretakers, had false papers that enabled her to evade the deportation to Auschwitz, but she chose to reveal her true identity while in Drancy, to be able to stay with the children. Feldblum survived Auschwitz and immigrated to Eretz Israel in 1946.

One of the children of La Maison d’Izieu was eleven-year-old Liliane Gerenstein. Lilliane and her brother were sent to their deaths a few days after she wrote this letter to God:

“God? How good You are, how kind, and if one had to count the number of goodnesses and kindnesses You have done, one would never finish.

God? It is thanks to You that I had a beautiful life before, that I was spoiled, and that I had lovely things that others do not have.

God? After that, I ask You one thing only: Make my parents come back, my poor parents protect them (even more than You protect me) so that I can see them again as soon as possible.

Make them come back again. Ah! I had such a good mother and such a good father! I have such faith in You and I thank You in advance.”

In 1987, Klaus Barbie was put on trial in France, and convicted of crimes against humanity. He was sentenced to life imprisonment. Testifying at the trial, Laja Feldblum-Klepten said:

“It is my duty to testify against Klaus Barbie in the name of my 44 children who were murdered at Auschwitz because every night they appear before my very eyes.”