There are a few amazing things about the death march from Dachau which had started on April 24,1945 and was headed to the Austrian border. Firstly it was a cold late April and early May because it was still snowing . Secondly there were still a few thousand victims alive but the most interesting thing is who saved the victims.

The victims were saved by the US 522nd Field Artillery Battalion. What was so special about this unit is that they were ‘Nisei’ they were  children of Japanese-born immigrants in the US.

What thought must have gone through the minds of he victims when they saw Japanese looking soldiers in a US uniform.

On 29 April a scouting expedition  of the 522nd found  a sub camp of  Dachau concentration camp.The camp was Kaufering IV Hurlach.

One of the men of the 522nd Field Artillery Battalion spoke about what he saw when he entered the camp.

“As we came around the way, there were a lot of Jewish inmates coming out of the camp, and I heard that the gate was opened by our advanced scouts. They took a rifle and shot it. I think it was a fellow from Hawaii that did that. I think it was a Captain Taylor, Company B was one of them, but another person from Hawaii, he passed away. They opened the gate and all these German, I mean, Jewish victims were coming out of the camp.

Then, when we finally opened the Dachau camp, got in, oh those people were so afraid of us, I guess. You could see the fear in their face. But eventually, they realized that we were there to liberate them and help them.

They were all just skin and bones, sunken eyes. I think they were more dead than they were alive because they hadn’t eaten so much because, I think, just before we got there the S.S. people had all pulled back up and they were gone. But, we went there, and outside of the camps there were a lot of railroad cars there that had bodies in them. I had the opportunity to go into the camp there, but you could smell the stench. The people were dead and piled up in the buildings, and it was just unbelievable that the Germans could do that to the Jewish people. I really didn’t think it was possible at all actually”

The men of the 522, initially wanted to give food to the inmates but were prevented from offering food and water to the prisoners because it could cause them more harm rather than help, the American soldiers found this difficult .Don Shimazu a member of the 522 recalled.

Our hearts were saying, ‘Yes, feed them, help them,’ but our heads were saying, ‘No, don’t feed them, those are orders!’ What those freed inmates must have suffered and endured is beyond imagination—they were like walking skeletons.”

On the 2nd of May the unit encountered Jewish inmates  who were put on a death march from Dachau and were approaching Waakirchen. 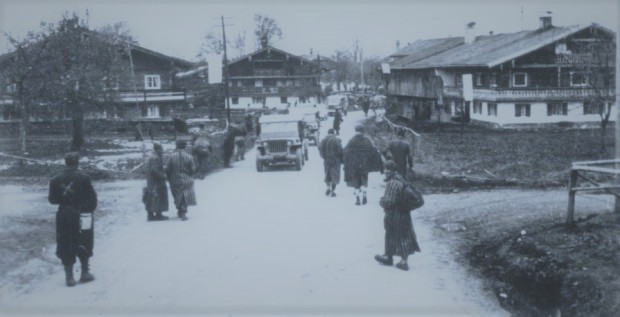