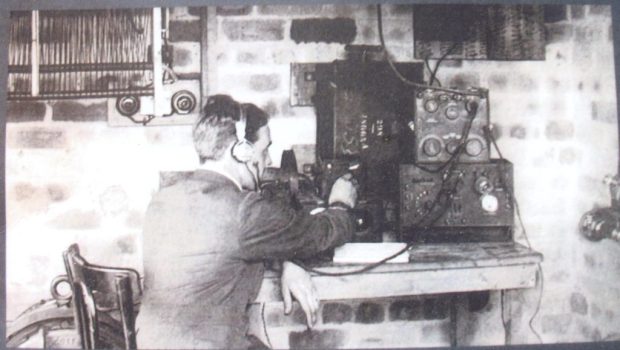 Below is a rare picture of Hitler briefing his top brass. For years they claimed to know nothing about the Holocaust. But  extraordinary secret recordings – made by the British – explode that myth.

Between 1942 and 1945, MI-19, a division of the British Directorate of Military Intelligence, created a number of Combined Services Detailed Interrogation Centres in and around London. The most important of these centers was at Trent Park, in North London. Sophisticated tapping equipment was installed, and secret gramophone recordings were made of conversations between German general staff officers. They were treated hospitably, provided with special rations of whisky and allowed regular walks on the grounds. The hidden microphones and listening devices allowed the British military (MI19) to gather important information and an intimate insight into the minds of the German military elite.

Following are some excerpts of the transcripts.

In one cell conversation, army General Edwin Graf von Rothkirch und Trach talks about his time in the Polish town of Kutno.

“I knew an SS leader pretty well, and we talked about this and that, and one day he said: ‘Listen, if you ever want to film one of these shootings? …I mean, it doesn’t really matter. These people are always shot in the morning. If you’re interested, we still have a few left over, and we could also shoot them in the afternoon if you like.”

In December 1944, Generalleutnant Heinrich Kittel, commander of 462 Volksgrenadier division, told General-major Paul von Felbert, commandant of Feldkommandantur 560: “The things I’ve experienced! In Latvia, near Dvinsk, there were mass executions of Jews carried out by the SS.”

“I got up and went outside and said: “What the hell’s all this shooting about?” The orderly said to me: “You ought to go over there, sir, you’ll see something.” 300 Men had been driven in from the town, they dug a communal grave then marched home again. The next day along they came again, men women and children – the executioners first laid all the clothes out in a big pile. And then twenty women were made to take up their positions – naked – on the edge of the trench. Someone gave the command and the twenty women dropped like ninepins down into the trench. I went away and I thought: “I’m going to do something about this. So I went over to the Security Service man and I said: “once and for all, I forbid these outside executions, where people can look on. If you kill people in the woods or somewhere where no-one can see, that’s your business. But I absolutely forbid another day’s shooting here. We draw our drinking water from deep springs; we’ll get nothing but corpse water!

“There were about 15 SS men and perhaps 60 Latvians, known to be the most brutal people in the world.

Men, women and children – they were counted off and stripped naked. The executioners first laid all the clothes in one pile. Then 20 women had to take up their position – naked – on the edge of the trench. They were shot and fell down into it.”

“What did they do to the children?” asked Felbert. Kittel – who sounded “very excited” at this point, according to the transcriber – answered: “They seized three-year-old children by the hair, held them up and shot them with a pistol and then threw them in. I saw that for myself. One could watch it.”

Lance Corporal Muller told Sergeant Faust about his experiences as his unit moved into Russia.

MULLER
Everywhere we saw women working. Extraordinarily lovely girls. We drove past; we would simply pull them into the armoured car, rape them and throw them out again.
And did they curse!

Horst Minnieur was one of a new group of POWs, who saw action on the Eastern Front.

MINNIEUR
“We were actually there when a pretty girl was shot.

Yes. You couldn’t tell that she was a Jewess; she was quite a nice type, too. It was just her bad luck that she had to die with the others. 75,000 Jews were shot there.”

2I was at Radom once and had my midday meal with the Waffen S.S. battalion there. An S.S. captain or whatever he was said: “Would you like to come along for half-an-hour? Get a machinegun and let’s go.” So I went along. I had an hour to spare and we went to some barracks and there we slaughtered 1,500 Jews. There were some twenty men with machine-guns. It was over in a couple of seconds, and nobody thought anything of it.”

FRIED
“Yes, I did. There were women and children there, too!”

BENTZ
“They were inside as well?”

FRIED
“Whole families, some were screaming terribly others were just apathetic.”

None of the men imprisoned at Trent Park were ever prosecuted for war crimes.