How do you best deal with a bully? You ridicule him.

The bully in this blog is Adolf Hitler and how painful and embarrassing it must have been for him to be ridiculed by something produced by a Jew.

I would have loved to have seen his face after he saw “Warner Brothers-Merrie Melodies: cartoon “Russian Rhapsody” produced by Leon Schlesinger and directed by Robert Clampett.

To top things of Hitler was voiced by Mel Blanc son  to Russian-Jewish parents Frederick and Eva Blank.

Hitler was a great fan of animated movies,one of his favourites was “Snow White and the Seven Dwarfs”

To be honest Hitler may not have seen the movie “Russian Rhapsody” himself, but it reasonably safe to assume that Joseph Goebbels as the Minister of Propaganda would have seen it. All movies mocking the Nazi regime were screened by the department.

The plot of the short movie is as follows.

It is late 1941, Nazi German bombers are not able to make it to Moscow; furious by the Luftwaffe’s’ constant failure, Adolf Hitler announces his decision via a radio broadcast at a “New Odor” rally that he will take charge and will personally fly a heavy bomber to attack the Russians. 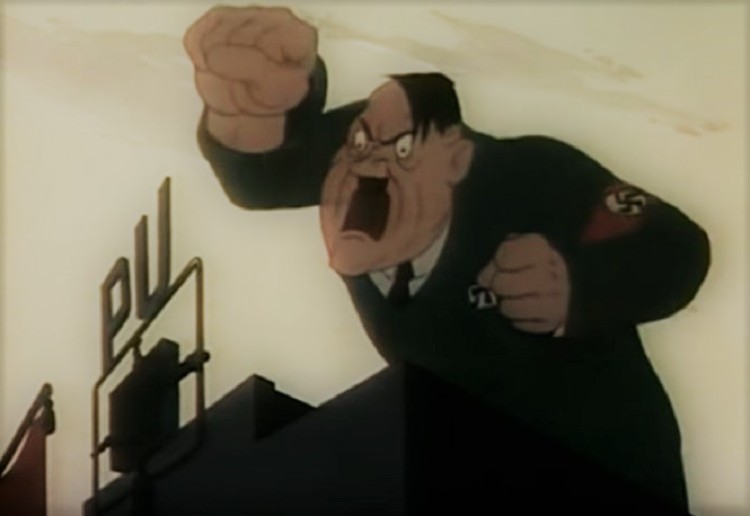 On the way to Moscow, Soviet gremlins sneak onto the plane in flight and without Hitler’s being aware of what’s going on, begin to dismantle it while singing “We Are Gremlins from the Kremlin”

Gremlins from the Kremlin was initially going to be the title for the movie but, in the early 1940s Walt Disney was developing a feature film based on Roald Dahl’s book “Gremlin Lore”, and had asked the other studios not to produce Gremlin films. Most of the studios honored the request. However Warner Bros. already had two cartoons too far into production – Falling Hare (1943) and this cartoon. As a compromise, Leon Schlesinger re-titled the cartoons to remove any reference to gremlins.

In the movie Hitler eventually discovers the gremlins after he’s been stabbed in his ass buttocks and tries to retaliate.He fails and after being frightened by a mask of Stalin put up by the Gremlins, the Gremlins manage to eject Hitler from the plane.

The fact that the movie was released and produced by a group of people with a Jewish background makes it even more special.

Although the cartoon may nowadays look like just that, a cartoon. The significance should not be underestimated. This was a hard hitting propaganda masterpiece, not only did it mock Hitler it also had messages in German in the cartoon.

At the start a newspaper front gives the headline  BLITZ HITS FRITZ!! , but below it there are has several headlines in coherent German. The one at upper right says, “Allies have reached last Axis defense line in Tunisia.” Below that on the left, “Marschall Rommel no superman, said Eisenhower.”

The mock Newspaper is called ” the Hamburg mit Onions”

There are only a few versions of the movie available online , some of them are dubbed and others are a bad quality. The bes version I came across was on Vimeo. But because I am not sure about the security safety of the site I decided not to post the video in this blog.

One thought on “When the Gremlins beat der Führer.”