The Nazi’s did not have ‘the monopoly’ on evil acts. Their Asian counterparts in Japan did not shy away from evil in order to get what they wanted. Some of their acts made the Nazi’s look like choirboys.

Unit 731  was a covert biological and chemical warfare research and development unit of the Imperial Japanese Army that undertook lethal human experimentation during the Second Sino-Japanese War (1937–1945) of World War II. It was responsible for some of the most notorious war crimes carried out by Japan. Unit 731 was based at the Pingfang district of Harbin, the largest city in the Japanese puppet state of Manchukuo (now Northeast China).

It was officially known as the Epidemic Prevention and Water Purification Department of the Kwantung Army. Originally set up under the Kempeitai military police of the Empire of Japan, Unit 731 was taken over and commanded until the end of the war by General Shiro Ishii, an officer in the Kwantung Army. 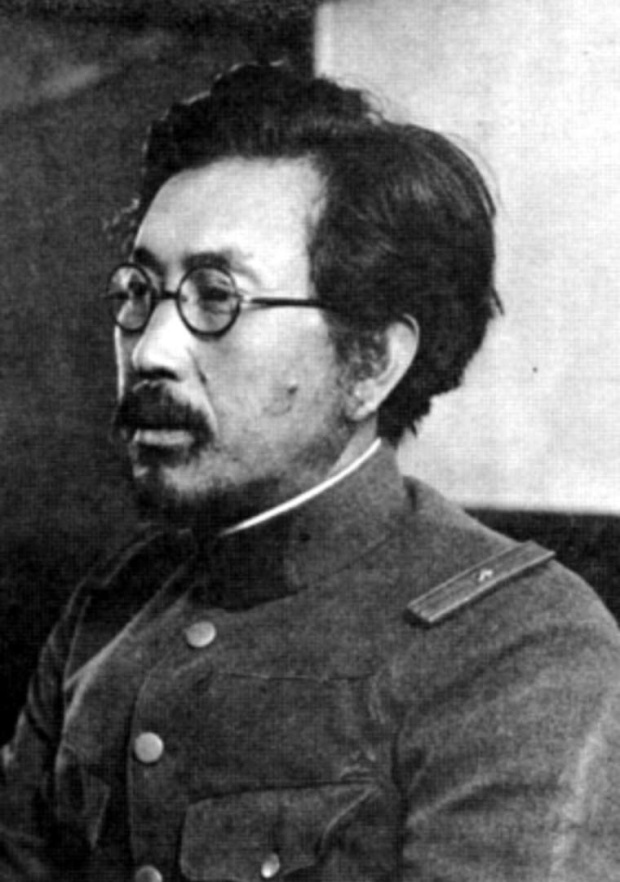 Referring to their victims as maruta, meaning logs, the researchers experimented on, apparently, anyone they could get their hands on: Chinese, Russians, Koreans, Mongolians, Pacific Islanders, other South East Asians and even a few American prisoners of war all fell victim to the doctors at the camps.

Unit 731 veterans of Japan attest that most of the victims they experimented on were Chinese, Koreans and Mongolians. Almost 70% of the victims who died in the Pingfang camp were Chinese, including both civilian and military.Close to 30% of the victims were Russian.Some others were South East Asians and Pacific Islanders, at the time colonies of the Empire of Japan, and a small number of Allied prisoners of war. The unit received generous support from the Japanese government up to the end of the war in 1945.

Instead of being tried for war crimes, the researchers involved in Unit 731 were secretly given immunity by the U.S. in exchange for the data they gathered through human experimentation. Others that Soviet forces managed to arrest first were tried at the Khabarovsk War Crime Trials in 1949. 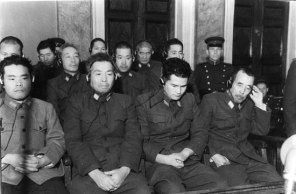 Americans did not try the researchers so that the information and experience gained in bio-weapons could be co-opted into the U.S. biological warfare program, as had happened with Nazi researchers in Operation Paperclip.On 6 May 1947, Douglas MacArthur, as Supreme Commander of the Allied Forces, wrote to Washington that “additional data, possibly some statements from Ishii probably can be obtained by informing Japanese involved that information will be retained in intelligence channels and will not be employed as ‘War Crimes’ evidence.” Victim accounts were then largely ignored or dismissed in the West as Communist propaganda.

Thousands of men, women and children interred at prisoner of war camps were subjected to vivisection, often without anesthesia and usually ending with the death of the victim. Vivisections were performed on prisoners after infecting them with various diseases. Researchers performed invasive surgery on prisoners, removing organs to study the effects of disease on the human body. These were conducted while the patients were alive because it was feared that the decomposition process would affect the results.The infected and vivisected prisoners included men, women, children, and infants, including pregnant women (impregnated by Japanese surgeons) and their infants.

Prisoners had limbs amputated in order to study blood loss. Those limbs that were removed were sometimes re-attached to the opposite sides of the body. Some prisoners’ limbs were frozen and amputated, while others had limbs frozen, then thawed to study the effects of the resultant untreated gangrene and rotting.

Some prisoners had their stomachs surgically removed and the esophagus reattached to the intestines. Parts of the brain, lungs, liver, etc. were removed from some prisoners.

Prisoners would be buried alive to see how long it would take before they died and what the effects were. 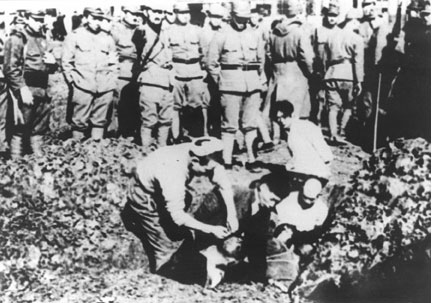 Prisoners were injected with inoculations of disease, disguised as vaccinations, to study their effects. To study the effects of untreated venereal diseases, male and female prisoners were deliberately infected with syphilis and gonorrhea, then studied. Prisoners were also repeatedly subject to rape by guards.

Plague fleas, infected clothing, and infected supplies encased in bombs were dropped on various targets. The resulting cholera, anthrax, and plague were estimated to have killed around and possibly more than 400,000 Chinese civilians.Tularemia was tested on Chinese civilians.

Unit 731 and its affiliated units (Unit 1644 and Unit 100 among others) were involved in research, development, and experimental deployment of epidemic-creating biowarfare weapons in assaults against the Chinese populace (both civilian and military) throughout World War II. Plague-infested fleas, bred in the laboratories of Unit 731 and Unit 1644, were spread by low-flying airplanes upon Chinese cities, coastal Ningbo in 1940, and Changde, Hunan Province, in 1941. This military aerial spraying killed thousands of people with bubonic plague epidemics.

(140110) — CHANGCHUN, Jan. 10, 2014 (Xinhua) — File photo copied on Jan. 7, 2014 shows personnels of “Manchukuo” attend a “plague prevention” action which indeed is an bacteriological test directed by Japan’s “Unit 731” in November of 1940 at Nong’an County, northeast China’s Jilin Province. The Japanese documents released on Friday by Jilin Provincial Archives regarding “biological warfare” show in detail Japanese troops’ activities in building “bacteria forces” in its colonial regions and using human beings for experiments to develop biological weapons during World War II. According to the archives, Japanese “bacteria forces” including Unit 731 started biological warfare in more than 20 provinces and cities of China on 161 occasions, claiming more than 270,000 lives and causing more than 2.37 million people to be infected by plague. (Xinhua/Wang Haofei) (mt)

Physiologist Yoshimura Hisato conducted experiments by taking captives outside, dipping various appendages into water, and allowing the limb to freeze. Once frozen, which testimony from a Japanese officer said “was determined after the ‘frozen arms, when struck with a short stick, emitted a sound resembling that which a board gives when it is struck'”, ice was chipped away and the area doused in water. The effects of different water temperatures were tested by bludgeoning the victim to determine if any areas were still frozen. Variations of these tests in more gruesome forms were performed.

Female prisoners were forced to become pregnant for use in experiments. The hypothetical possibility of vertical transmission (from mother to fetus or child) of diseases, particularly syphilis, was the stated reason for the torture. Fetal survival and damage to mother’s reproductive organs were objects of interest. Though “a large number of babies were born in captivity” of Unit 731, there has been no account of any survivors of the facility, children included. It is suspected that the children of female prisoners were killed or the pregnancies terminated.

While male prisoners were often used in single studies, so that the results of the experimentation on them would not be clouded by other variables, women were sometimes used in bacteriological or physiological experiments, sex experiments, and the victims of sex crimes. The testimony of a unit member that served as guard graphically demonstrates this reality:

“One of the former researchers I located told me that one day he had a human experiment scheduled, but there was still time to kill. So he and another unit member took the keys to the cells and opened one that housed a Chinese woman. One of the unit members raped her; the other member took the keys and opened another cell. There was a Chinese woman in there who had been used in a frostbite experiment. She had several fingers missing and her bones were black, with gangrene set in. He was about to rape her anyway, then he saw that her sex organ was festering, with pus oozing to the surface. He gave up the idea, left, and locked the door, then later went on to his experimental work

Human targets were used to test grenades positioned at various distances and in different positions. Flame throwers were tested on humans. Humans were tied to stakes and used as targets to test germ-releasing bombs, chemical weapons, and explosive bombs. 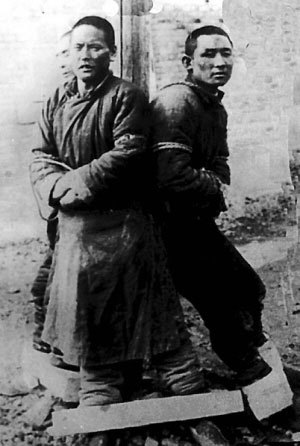 At the end of the war, unit 731 scientists destroyed much of the evidence of the program. According to reports, however, some infected test animals were released; it is believed that at least 30,000 people died from the plague in the Pingfang area within the first three years after the war.

In Japan, not one was brought to justice. In a secret deal, the post-war American administration gave them immunity for prosecution in return for details of their experiments. 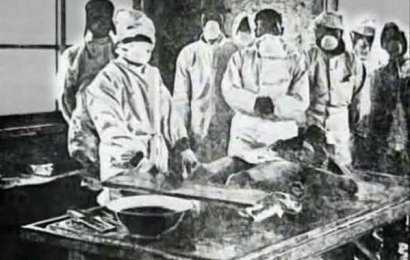 Some of the worst criminals, including Hisato Yoshimura, who was in charge of the frostbite experiments, went on to occupy key medical and other posts in public and private sectors.

Like the German rocket scientists and engineers who were folded into military and other governmental programs at the end of World War II through Operation Paperclip, unit 731’s scientists were given immunity from prosecution and their atrocities were covered-up in exchange for exclusive access to their findings.

I don’t know what is more disturbing. The actual atrocities or the fact it was covered up and immunity was given or the fact that some of these’scientists’ were actually medical doctors, who subscribed to the principle of “First do no harm”

The amounts of graphic pictures relating to Unit 731 are staggering, but most of them were just too horrendous to include in this blog.