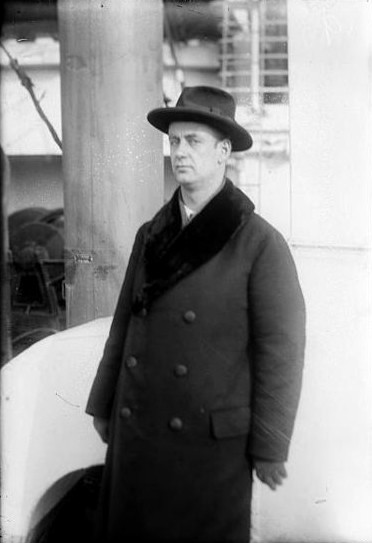 Wilhelm Furtwängler (January 25, 1886 – November 30, 1954) was a German conductor and composer. He is considered to be one of the greatest symphonic and operatic conductors of the 20th century.

I will focus on his work and life during the Nazi Era and especially his relationship with the Nazi leadership.

Furtwängler was very critical of Hitler’s appointment as Chancellor of Germany, and was convinced that Hitler would not stay in power for long.He had said of Hitler in 1932, “This hissing street pedlar will never get anywhere in Germany”.

In 1934, Furtwängler publicly described Hitler as an “enemy of the human race” and the political situation in Germany as a “Schweinerei” (“pigsty”).

On November 25, 1934, he wrote a letter in the Deutsche Allgemeine Zeitung, “Der Fall Hindemith” (“The Hindemith Case”), in support of the composer Paul Hindemith.

Hindemith had been labelled a degenerate artist by the Nazis. Furtwängler also conducted a piece by Hindemith, Mathis der Maler although the work had been banned by the Nazis.

The concert received enormous acclaim and unleashed a political storm. The Nazis (especially Alfred Rosenberg, the Nazi Party’s chief racial theorist) formed a violent conspiracy against the conductor, who resigned from his official positions, including his titles as vice-president of the Reichsmusikkammer and of Staatsrat of Prussia. His resignation from the latter position was refused by Göring. He was also forced by Goebbels to give up all his artistic positions.

Furtwängler decided to leave Germany,[ but the Nazis prevented him. They seized the opportunity to “aryanize” the orchestra and its administrative staff. Most of the Jewish musicians of the orchestra had already left the country and found positions outside Germany, with Furtwängler’s assistance.

On February 28, 1935, Furtwängler met Goebbels, who wanted to keep Furtwängler in Germany, since he considered him, like Richard Strauss and Hans Pfitzner, a “national treasure”.

Goebbels asked him to pledge allegiance publicly to the new regime. Furtwängler refused. Goebbels then proposed that Furtwängler acknowledge publicly that Hitler was in charge of cultural policy. Furtwängler accepted: Hitler was a dictator and controlled everything in the country. But he added that it must be clear that he wanted nothing to do with the policy and that he would remain as a non-political artist, without any official position.The agreement was reached. Goebbels made an announcement declaring that Furtwängler’s article on Hindemith was not political: Furtwängler had spoken only from an artistic point of view, and it was Hitler who was in charge of the cultural policy in Germany.

Karajan had joined the Nazi Party early and was much more willing to participate in the propaganda of the new regime than Furtwängler.Furtwängler had attended several of his concerts, praising his technical gifts but criticizing his conducting style; he did not consider him a serious competitor. However, when Karajan conducted Fidelio and Tristan und Isolde in Berlin in late 1938, Göring decided to take the initiative. The music critic Edwin von der Nüll wrote a review of these concerts with the support of Göring. Its title, “The Karajan Miracle”, was a reference to the famous article “The Furtwängler Miracle” that had made Furtwängler famous as a young conductor in Mannheim. Von der Nüll championed Karajan saying, “A thirty-year-old man creates a performance for which our great fifty-year-olds can justifiably envy him”. Furtwängler’s photo was printed next to the article, making the reference clear.

During the war, Furtwängler tried to avoid conducting in occupied Europe. He said: “I will never play in a country such as France, which I am so much attached to, considering myself a ‘vanquisher’. I will conduct there again only when the country has been liberated”.He refused to go to France during its occupation, although the Nazis tried to force him to conduct there.Since he had said that he would conduct there only at the invitation of the French, Goebbels forced the French conductor Charles Munch to send him a personal invitation. 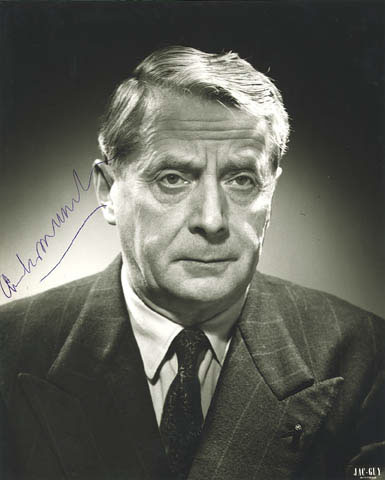 But Munch wrote in small characters at the bottom of his letter “in agreement with the German occupation authorities.” Furtwängler declined the invitation.

Furtwängler did conduct in Prague in November 1940 and March 1944. The 1940 program, chosen by Furtwängler, included Smetana’s Moldau. According to Prieberg, “This piece is part of the cycle in which the Czech master celebrated ‘Má vlast (My Country), and […] was intended to support his compatriots’ fight for the independence from Austrian domination […] When Furtwängler began with the ‘Moldau’ it was not a deliberate risk, but a statement of his stance towards the oppressed Czechs”.The 1944 concert marked the fifth anniversary of the German occupation and was the result of a deal between Furtwängler and Goebbels: Furtwängler did not want to perform in April for Hitler’s birthday in Berlin. He said to Goebbels in March (as he had in April 1943) that he was sick. Goebbels asked him to perform in Prague instead, where he conducted the Symphony No. 9 of Antonín Dvořák.

He conducted in Oslo in 1943, where he helped the Jewish conductor Issay Dobrowen to flee to Sweden.

In April 1942, Furtwängler conducted a performance of Beethoven’s ninth symphony with the Berlin Philharmonic for Hitler’s birthday.

This concert led to heavy criticism of Furtwängler after the war. In fact, Furtwängler had planned several concerts in Vienna during this period to avoid this celebration.But after the defeat of the German army during the Battle of Moscow, Goebbels had decided to make a long speech on the eve of Hitler’s birthday to galvanize the German nation. The speech would be followed by Beethoven’s ninth symphony. Goebbels wanted Furtwängler to conduct the symphony by whatever means to give a transcendent dimension to the event. He called Furtwängler shortly before to ask him to agree to conduct the symphony but the latter refused arguing that he had no time to rehearse and that he had to perform several concerts in Vienna. But Goebbels forced the organizers in Vienna (by threatening them) to cancel the concerts and ordered Furtwängler to return to Berlin In 1943 and 1944, Furtwängler provided false medical certificates in advance to be sure that such a situation would not happen again.

It is now known that Furtwängler continued to use his influence to help Jewish musicians and non-musicians escape the Third Reich. He managed to have Max Zweig, a nephew of conductor Fritz Zweig, released from Dachau concentration camp. Others, from an extensive list of Jews he helped, included Carl Flesch, Josef Krips and the composer Arnold Schoenberg.

Furtwängler refused to participate in the propaganda film Philharmoniker. Goebbels wanted Furtwängler to feature in it, but Furtwängler declined to take part. The film was finished in December 1943 showing many conductors connected with the Berlin Philharmonic Orchestra, including Eugen Jochum, Karl Böhm, Hans Knappertsbusch, and Richard Strauss, but not Furtwängler. Goebbels also asked Furtwängler to direct the music in a film about Beethoven, again for propaganda purposes. They quarralled violently about this project. Furtwängler told him “You are wrong, Herr Minister, if you think you can exploit Beethoven in a film.” Goebbels gave up his plans for the film.

Friedelind Wagner (an outspoken opponent of the Third Reich) reported a conversation with her mother Winifred Wagner during the war, to the effect that Hitler did not trust or like Furtwängler, and that Göring and Goebbels were upset with Furtwängler’s continuous support for his “undesirable friends”.

Yet Hitler, in gratitude for Furtwängler’s refusal to leave Berlin even when it was being bombed, ordered Albert Speer to build a special air raid shelter for the conductor and his family. Furtwängler refused it, but the shelter was nevertheless built in the house against his will. Speer related that in December 1944 Furtwängler asked whether Germany had any chance of winning the war. Speer replied in the negative, and advised him to flee to Switzerland from possible Nazi retribution. In 1944, he was the only prominent German artist who refused to sign the brochure ‘We Stand and Fall with Adolf Hitler’.

Furtwängler’s name was included on the Gottbegnadeten list (“God-gifted List”) of September 1944, but was removed on December 7, 1944 because of his relationships with German resistance.Furtwängler had strong links to the German resistance which organized the 20 July plot. 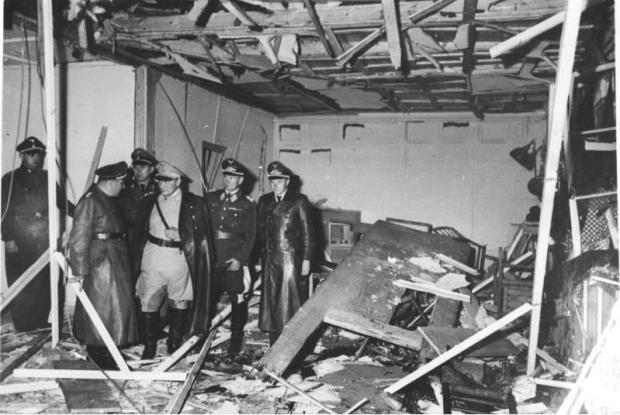 He stated during his denazification trial that he knew an attack was being organized against Hitler, although he did not participate in its organization. He knew Claus von Stauffenberg very well and his doctor, Johannes Ludwig Schmitt, who wrote him many false health prescriptions to bypass official requirements, was a member of the Kreisau Circle. 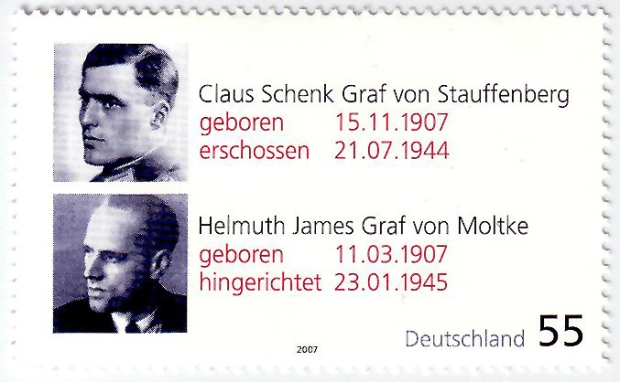 Furtwängler’s concerts were sometimes chosen by the members of the German resistance as a meeting point. Rudolf Pechel, a member of the resistance group which organized the 20 July plot said to Furtwängler after the war: “In the circle of our resistance movement it was an accepted fact that you were the only one in the whole of our musical world who really resisted, and you were one of us.”Graf Kaunitz, also a member of that circle, stated: “In Furtwängler’s concerts we were one big family of the resistance.”

Furtwängler was “within a few hours of being arrested ” by the Gestapo when he fled to Switzerland, following a concert in Vienna with the Vienna Philharmonic on January 28, 1945. The Nazis had begun to crack down on German liberals. At the concert he conducted Brahms’s Second Symphony, which was recorded and is considered one of his greatest performances.

Once Adolf Hitler threatened to send Furtwängler to the Dachau concentration camp,whereupon he replied”At least I will be in good company”

Furtwängler was required to submit to a process of denazification. He was charged with having conducted two Nazi concerts during the period 1933–1945. The first was for the Hitler Youth on 3 February 1938. It was presented to Furtwängler as a way to acquaint younger generations with classical music. According to Fred Prieberg: “when he looked at the audience he realized that this was more than just a concert for school kids in uniform; a whole collection of prominent political figures were sitting there as well […] and it was the last time he raised his baton for this purpose”.

He was charged for his honorary title of Staatsrat of Prussia (he had resigned from this title in 1934, but the Nazis had refused his resignation) and with making an anti-semitic remark against the part-Jewish conductor Victor de Sabata.The chair of the commission, Alex Vogel, started the trial with the following statement:

“The investigations showed that Furtwängler had not been a member of any [Nazi] organization, that he tried to help people persecuted because of their race, and that he also avoided… formalities such as giving the Hitler salute.”

At the end of the trial, musicians certified that Furtwängler helped many people during Nazi era such as Hugo Strelitzer, who declared:

If I am alive today, I owe this to this great man. Furtwängler helped and protected a great number of Jewish musicians and this attitude shows a great deal of courage since he did it under the eyes of the Nazis, in Germany itself. History will be his judge