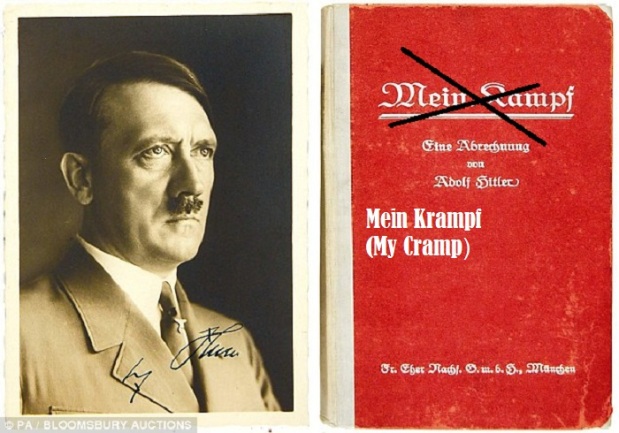 I am staring off by saying I know I will be getting angry comments, saying how disrespectful  I am. How do I know this?

I did post a blog before with the title “Holocaust and Humour” after I published it,a lot of people complained and even called it disgusting, When I asked if they read the blog the all said “no” they had only seen the title and that was enough, But each of them came back and praised the blog after reading it.

For this blog it will probably be the same, some will see the title(not even realizing that it starts with Mein Krampf-My Cramp- rather then Mein Kampf)

I can assure you nothing in this blog will be disrespectful in fact the opposite will be true.

In the ghettoes, Hitler’s  self proclaimed “masterpiece” was referred to as Mein Krampf (My Cramp).His theory of the “Master Race” was the subject of many jokes. Following are a few of them.

“There are two kinds of Aryan, Non Aryan and Barb-Aryan” 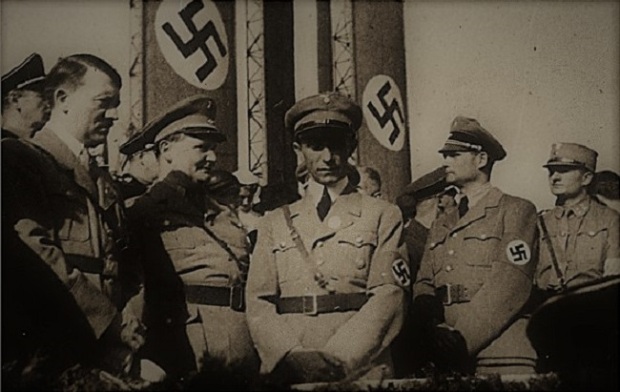 The following jokes were heard in the Ghettoes, however I don’t know by whom, But they were recalled by survivors after the war.

“A young boy was asked in the Warsaw Ghetto. What would you like most of all if you were Hitler’s son?

He answered: “to be orphaned.”

Peter Lorre, the famous actor who played the  murderous villain in the Fritz Lang directed movie M in 1931. He resided in Vienna and  was invited by Goebbels to come to Berlin, Goebbels was not aware Lorre was Jewish. Lorre friendly declined the offer and replied. “There isn’t room in Germany for two murderers like Hitler and me.”

Anyone who mocked the Nazi regime would face harsh punishment, including the death penalty. A young Catholic priest Josef Müller, made a joke and was executed for it.

Müller was arrested after repeating a satirical joke about a dying German Wehrmacht soldier  on his deathbed, who asked a  nurse  to lay a portrait of Hitler on his one side, a portrait of Göring on the other. Then, he gasped: “Now I can die like Jesus Christ. between two thieves” Müller was interrogated and temporarily taken into custody on 6 September 1943 under charges of comparing Hitler and Göring with the two criminals crucified alongside Jesus Christ.

The indictment against Müller called this joke “one of the most vile and most dangerous attacks directed on our confidence in our Führer. . . . It is a betrayal of the people, the Führer, and the Reich. Although he was interrogated and tortured several times he would not divulge where he got the joke from. He was executed by guillotine n September 11 1944.

In the summer of 1943 a satire was performed in Dachau concentration camp. The play lasted for several weeks.The main character was Count Adolar, a thinly disguised Hitler, The satire was written by Rudolf Kalmar.

He survived the camp and became a popular actor in East Germany after the war. Another survivor, described the effect of this satire on the camp inmates: “Many of them, who sat behind the rows of the SS each night and laughed with a full heart, didn’t experience the day of freedom. But most among them took from this demonstration strength to endure their situation. . . . They had the certainty, as they lay that night on their wooden bunks: We have done something that gives strength to our comrades. We have made the Nazis look ridiculous.