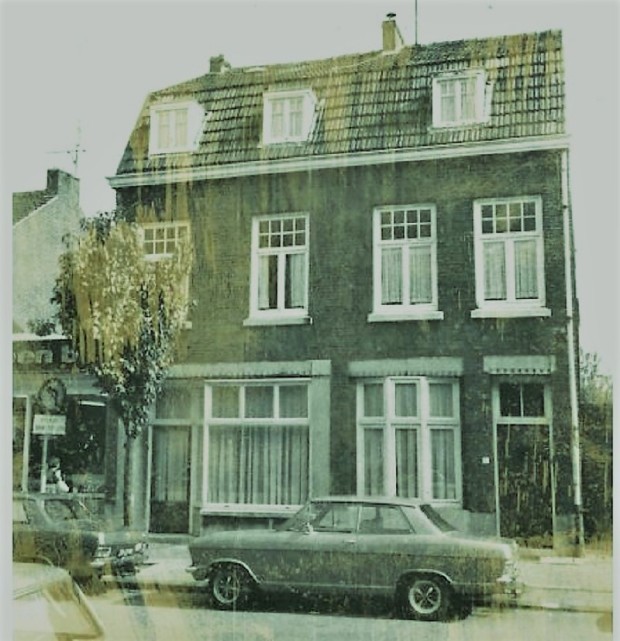 May 10, 2020 is Mother’s Day in most countries, with only a few exceptions like the UK and Ireland who had it on March 22. May 10 1943 is the date when one Jewish Mother and Grandmother was killed at Westerbork, aged 83. Her name was  Jeanette Meyer-Cahn, wife and  widow of Daniel Meyer. Daniel had died on 10 March 1941 in Geleen, the Netherlands.

Although Jeanette was originally from Leutesdorf, near Koblenz in Germany in 1938 Jeanette, Daniel and their youngest child, Max, and his in laws, the Kaufmann family moved to the Netherlands, initially to Sittard and on June 21,1939 to neighbouring Geleen. The address Jeanette and Daniel moved to was Graaf Huynlaan 5. The picture above is of that address. This is where suddenly the Holocaust comes very near to me again.

Not only passed I by that address a lot, because it was actually in the city centre, I even bought sunglasses a few times in the sunglasses shop right next to the house. It is also in the direct vicinity of the bank, ABN AMRO where I had an account, and in fact still have, but also my favourite restaurant, Akropolis, as the name suggest a Greek restaurant.

It was also near a bistro, named ‘t Wittebroodje, which served a great French onion soup.

Walter was killed in WWI during the battle of Verdun. Leo and his wife had emigrated to South America in the 1930’s.

On August 25, 1942 Max and his wife Berta reported to the Market in Geleen, from there they are first deported to Maastricht and then to Poland via Westerbork, where in Poland they ended up isn’t clear. All we know is that they did not survive.

Jeanette’s 2 daughters and grandsons were all killed during the Holocaust.

Jeanette died  on 10 May 1943 in Westerbork transit camp, due to illness and exhaustion and she was cremated on 12 May 1943. The urn with her ashes was placed on the Jewish cemetery on field U, row 6, grave nr. 6.

Only Leo survived the war.

The war may have ended 75 year ago and with it also the Holocaust, it is a fact that decades on people like me can still find a connection with it.