One of the ways how the Nazis were able to include regular citizens in their web of evil and deceit was by propaganda. Regardless what you think of them, they were masters of propaganda, it enabled them to brainwash the ordinary citizenry. That combined with promising and delivering employment and some level of prosperity is a powerful weapon.

In fact it probably was their most powerful weapon because it allowed them to get away with awful crimes and atrocities.

Here are just some of the propaganda slogans and posters used during the Nazi era.To be honest some of them look very similar to motivational posters which are used nowadays.

The text: “National Socialism is the guarantee of victory.” This poster was released in fall 1939.

A quotation from Clausewitz: “The time is yours. What happens with it depends on you.” ( September 1940)

A quotation from Hermann Göring: “To help to defend and finish the Führer’s enormous work is the happiest task and highest duty of all Germans” (May 1941) 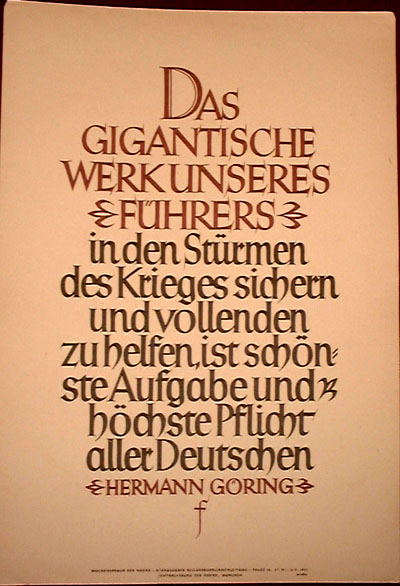 This quotation from Hitler’s 30 January 1939 speech promises the destruction of the Jews. It appeared in September 1941, after the invasion of the Soviet Union, and during the opening stages of the Holocaust. The translation: “If International Finance Jewry should succeed once more in plunging the peoples into a world war, the result will not be the victory of Jewry, but rather the destruction of the Jewish race in Europe.

This one encourages motherhood. The translation is: “Work is an honor for the woman as is it for the man, but a child ennobles the mother.” ( December 1942) 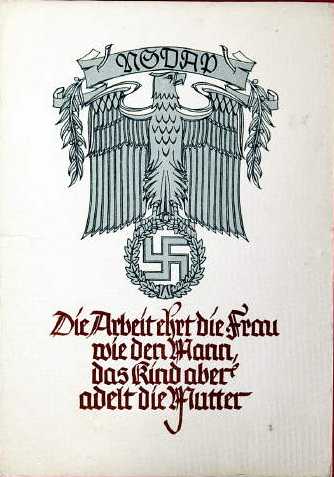 A quotation from Joseph Goebbels: “Only composure and a heart of bronze bring victory.” (January 1943)

This July 1932 election poster shows the German worker, enlightened through National Socialism, towering over his opponents. It reads “We Workers Have Awakened. We’re Voting National Socialist”